From the sun’s scorching heat to strong splashes of the downpours, cantilever umbrella canopies have to go through a lot. As a result, the fabric will fade, rip, or lose its shine over time. However, it does not mean you should replace the umbrella when you can just replace the canopy.

How to replace canopy on cantilever umbrella? Start with removing the existing canopy, then measure the diameter of the umbrella, and feed the new canopy to the metal ribs. Adjust the fit, and you are done.

Anyone with basic DIY knowledge would’ve understood what’s to be done to replace the canopy.

In this article, I’ve broken down the steps to replace the canopy like a pro and give your beautiful cantilever umbrella a new life.

Reasons to Replace a Canopy on Cantilever Umbrella

Should you really replace the canopy on the cantilever umbrella? Well, there are many reasons why replacing the canopy is the only solution. But replacing it is always not a good idea.

Below mentioned are some solid reasons you should replace the canopy.

Over the years, the canopy will fade, and you cannot do anything about it. So replacing the canvas is the only solution to make the umbrella look beautiful again.

The canvas may rip due to the umbrella spinning or falling over due to strong winds. While you can get some small holes patched or repaired, bigger holes call for a replacement.

3. The Ribs are Losing the Canvas

There are loops on the canvas that you feed to the ribs, and if these loops break, you have to replace the canopy.

4. You Need a Different Color

If the existing color of the canopy does not go well with the décor of your patio or pool deck, you can consider replacing it with a new color. Check out this color guide to select the best colorful cantilever canopy.

How to Replace a Canopy on Cantilever Umbrella: Step-by-step Process

Step 1: Measure the Diameter of the Canopy 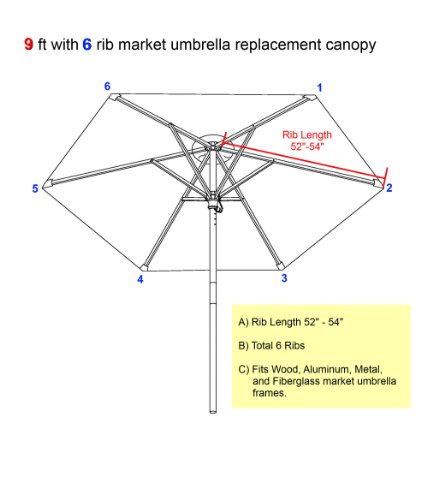 Begin with measuring the diameter of the canopy if you do not know it. The easiest way is to grab the instruction manual and go through the dimensions. Or you can skim through the online listing of the particular umbrella.

If nothing works, get a measuring tape, and measure the diameter. Measure from the center of the pole to the end of the umbrella rib, double that number, and you have the exact diameter.

However, if the canopy isn’t flat, and has a big curve, then the diameter will be more than what you have measured. Go for a slightly larger canopy from your reckoned measurements.

Step 2: Count the Number of Ribs 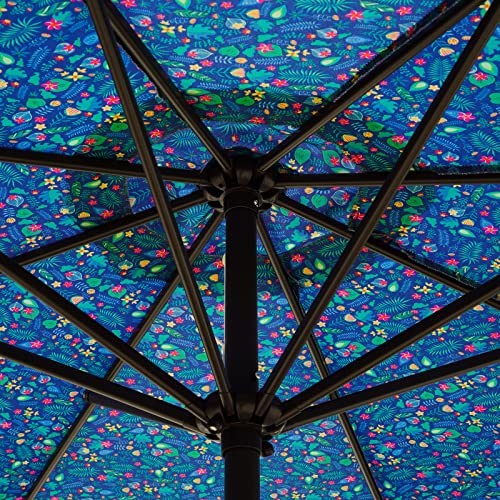 If the umbrella has an air vent, order a canopy with the same air ventilation system. The biggest benefit of having an air vent is that it prevents the canopy from flying while letting hot air pass through it.

I recommend choosing a replacement canopy from the same brand as the umbrella since you’ll get the exact air vent system you have now. 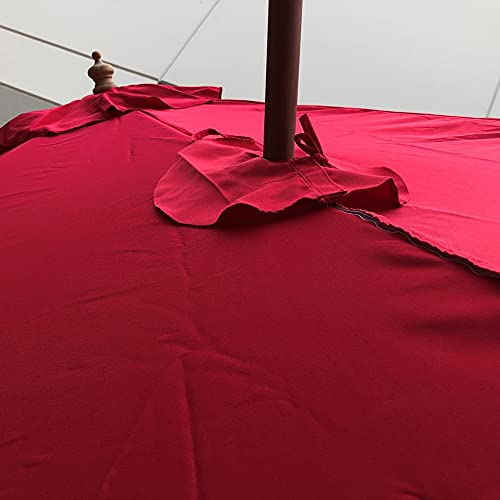 Now you are all set to remove the existing canopy. Bring the umbrella down, and remove the canopy sleeves from the metal ribs. Pay extra attention, as being hard can get the ribs bent, and installing the new canopy will be a challenging task.

It would be great to have someone around you to help, and it’ll help you remove the canopy safely.

Step 5: Clean the Ribs and the Frame

A lot of homeowners do not clean the ribs and quickly start feeding new canvas on them. However, this is not the best practice.

You should clean the ribs properly in order to get the dust off. Take a dry cloth, and clean the entire frame. You can even use a soft-bristle brush to clean it while protecting the paint/finish.

Step 6: Feed the Canvas to the Ribs and Change the Cantilever Umbrella Canopy

Open the canopy sleeves a bit, and feed them to the ribs. Put the sleeves on the ribs one by one, and do it for all metal ribs. Having someone to help will get this task done quickly, and you won’t get bored as well.

Cross-check that every sleeve is carefully put on the ribs before you go ahead and finalize the canopy.

Step 7: Adjust the Canvas, and You are Good to Go

Before you install the umbrella back in place, check if the canvas looks okay. Inspect the entire canopy and adjust the fit if required. Open/close the umbrella a few times, and you can see how the new canopy looks.

In case you feel that the canopy is small, and restricting the movement of the umbrella, remove it immediately before it tears apart. Or, if the canopy looks too big, you need to remove it as well and order a smaller one.

Measure the canopy again, and order the right size that fits perfectly.

Watch this video on how to replace the canopy on Cantilever Umbrella easily.

Tips to Replace the Cantilever Umbrella Canopy with Ease

One of my friends works in a company that installs cantilever umbrellas and replaces their canopies, so I called him to get some tips. Here are a few tips he said will make the installation easier.

The first thing he told me to do was inspect the entire frame. When checking the metal frame, look for any damages, signs of corrosion, and other issues before you replace the canopy.

2. Always Order a Canopy After Measuring the Umbrella

A lot of people order a canopy before even measuring the existing canopy, and it is not the right way. It is essential to measure the canopy and then order a new one. This will give you a clear idea of the size, and you don’t have to rely on guesswork.

If you don’t want to end up creating a mess, don’t replace the canopy on a windy day. Removing the existing canopy will become daunting, as the umbrella will sway away, and you’ll experience the same thing when installing a new one.

If the canopy does not fit, do not force it, as the canvas may get damaged or torn apart. Also, when opening/closing the umbrella for the first time, you need to be gentle with it. Have a look at how the canopy stretches and if it is able to bear the tension created by the metal ribs.

Q1: Can you Repair a Patio Umbrella Fabric?

Yes, you can, but only if the holes or damage is not significant. The sewed umbrella canvas will also hinder its appearance, so the best option is to replace the canopy.

Q2: How do you Measure a Replacement Parasol Canopy without a Measuring Tape?

Measuring the canopy without a measuring tape is not a good idea since every inch matters. If you don’t have a measuring tape handy, use some mobile apps that let you measure things with precision. Or you can use something like a piece of rope if you are sure about its size.

Q3: Should you Call Professionals to Replace the Cantilever Umbrella Canopy?

No, there is no need to call professionals since you can do the task by yourself. Always have someone around you for assistance and safety.

Q4: How do you Remove the Cantilever Umbrella Cover?

Yes, you can replace patio umbrella fabric if required. Remove the existing fabric carefully, measure the umbrella frame, and feed the new fabric to the metal ribs to get the job done.

Now you know everything about how to replace a cantilever umbrella canopy, so the next time it fades or rips, you can replace it quickly. Replacing the canopy is the best solution and doesn’t cost you a lot of money.

Just make sure to order the right canopy size that fits properly and doesn’t restrict the movement of the umbrella’s frame. Lastly, test the umbrella multiple times by closing/opening it to be sure about its smooth movement.

I can imagine your frustration seeing the patio umbrella sway away with the wind, as I’ve been through the same. It can easily get the umbrella damaged, and can also get someone standing nearby hurt seriously. So, how to stop a cantilever umbrella from swaying? The easiest way to keep the umbrella in place is…

Overexposure to sunlight, rough handling, and overuse can lead to the umbrella strings wearing out quickly. And unfortunately, you can’t stop it from happening. The only solution is restringing the umbrella to make it usable. But, how to restring a cantilever umbrella? First, remove the umbrella from the pivot, examine the damaged section if a…

If you’re a gardener, one of the skills that you need to learn is how to sharpen the pruning saw. The pruning saw is a very useful garden tool. Aside from making your plants look attractive, pruning also improves the health and productivity of both the flowering plants and fruiting shrubs. When doing the pruning… Hey everyone! Today we have compiled an amazing list of 11 best garden tools that will make gardening super easy and fun. Gardening is a pleasurable activity for lovers of flora but is nevertheless a daunting and exhaustive hobby. Gardening involves several chores like plowing, tilling, chopping and trimming leaves, sowing and a whole lot…